Actuarial valuation and reporting of a pension scheme under IAS 19 is significantly more complex than other employee benefit plans. Several issues, which after often ignored, need to be understood and allowed for when reporting for pension schemes.

This post presents a list of some of the issues that are important for pension scheme reporting under IAS 19. An overview of IAS 19 can be found here.

The issues are generally also applicable to other similar accounting standards, such as ASC 715, Ind AS 19, FRS 17 and AS 15. For general information about actuarial valuation of lumpsum benefits and compensated absences, please refer to this page.

This is the most fundamental issue when performing an actuarial valuation of pension scheme. Many actuaries measure the pension scheme liability as the expected present value of payments that will be required to purchase annuities (or pensions) from an insurer at retirement or exit. They often measure this obligation in reference to the annuity rates offered by insurers.

Let’s get one thing absolutely clear – the obligation of a pension scheme is to pay the benefits, determined as per the rules of the scheme. Replacing this fundamental obligation with an obligation to purchase a pension externally is incorrect.

One could argue that the obligation to purchase an annuity will be quite similar to the cost of providing pension benefits directly. But, there are several issues with using insurers’ annuity rates:

For avoidance of doubt, I am not implying here that the valuation cannot be done by capitalising pension payments. Though I do not advise using the capitalisation method, it is nevertheless, a valid method as long as the scheme rules are simple. However, capitalisation should be done using sponsor’s own assumptions, rather than using insurer’s annuity rates as a proxy.

Many schemes offer pension payments that are linked to inflation of some form.

Actuaries who measure the obligation as described in the first point above, will need to find annuity products that exactly replicate the inflation-linked pension that is offered by the scheme, including any dependent’s or survivor’s pension, which is unlikely. In some markets, insurers may not offer inflation-linked annuities at all.

Therefore, it is highly likely that the reported DBO for such schemes may not be correct.

As per IAS 19, settlement is a transaction that eliminates all further legal or constructive obligations for part or all of the benefits provided under a defined benefit plan, other than the regular benefit payments under the plan.

When an annuity is purchased for a member from an insurer, it is a settlement transaction, provided:

If the above conditions are met, then the amount of premium paid to the insurer should be shown as ‘settlement benefits’, rather than ‘regular benefit payments’ in IAS 19 reports.

The loss on settlement, which is the amount paid to procure the pension, less the value of DBO extinguished, is recognised in Profit or Loss.

The regular benefit payments should reflect just the annuity payments, rather than the amount paid to purchase annuities from the insurer.

In cases where an annuity is not purchased in the name of the member, the legal obligation to provide the benefits remains entirely with the sponsor. However, the annuities should be recognised as assets and need to be valued separately.

The value of the annuity assets is calculated as the present value of future payouts from these annuities and are typically calculated using the same assumptions as for the valuation of DBO.

If the annuities can be treated a ‘qualifying insurance policy’, the annuities are considered ‘plan assets’. The net pension liability in the balance sheet of the sponsor will be net of value of the annuities.

5. Not allowing for mortality improvements

Pension reporting under IAS 19 para 82 specifically requires that an allowance is made about the future mortality improvements. If you haven’t made any allowance for improvements, then the DBO recognised is not correct as per IAS 19.

6. Choice of discount rate not compliant with IAS 19

The IAS 19 discount rate should be set by reference to the ‘term of the obligation’, which essentially means the time duration over which the benefits are expected to be paid. For Indian market, we have published the discount rates here.

There are two issues here:

Download our white paper on transitioning to Indian Accounting Standards from an employee benefits perspective by clicking the picture below: 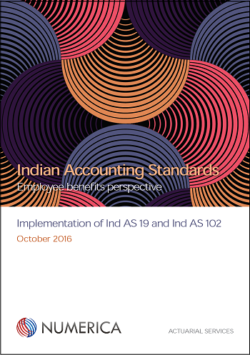