This post sets out some of the issues that auditors must be aware of when they review the actuarial reports.

The focus is on audit of Ind AS 19 reports, but the points below are equally relevant for AS 15 reports as well.

1. Do a comparison with the past year numbers, but make sure you understand the differences

Some auditors review actuarial reports with the sole objective of making sure that the figures in actuarial reports are not too different from the last year. This analysis is necessary, but this should just be the starting point. A deviation from the comparatives, doesn’t necessarily mean that there is something wrong. Consider the following table, which shows the reconciliation of Defined Benefit Obligation (DBO) as per Ind AS 19:

This table looks very well since the numbers are very consistent with the prior year. However, if you look at the assumptions for the two periods, you would see that the discount rate has come down significantly.

A fall in discount rate leads to a rise in DBO, which in turn, should have created a significant actuarial loss this year. Instead, we have an actuarial gain (negative remeasurements).

Therefore, an audit approach that focuses purely on the consistency of numbers between consecutive periods, will fail to uncover a potential error.

2. You can get a good sense of the liability without doing an actuarial valuation yourself

A simple formula can get you quite close to what the DBO from an actuarial valuation should be. The formula goes as follows:

These formulae can sometimes produce results quite different from the actuarial valuation, especially for new companies and several other situations. This does not necessarily mean that the results of actuarial valuation are incorrect; it simply calls for further investigation.

The average future service is NOT the potential service till retirement, but adjusted to allow for probability of death and resignation. All actuarial reports should disclose this number.

3. Challenge the magnitude of remeasurement or actuarial loss

This is the most important aspect of audit of actuarial reports. Broadly speaking, remeasurement (or actuarial loss under AS 15) is the balancing item in the DBO reconciliation table, like the one shown above in point 1. Conceptually, it represents the combined impact of changes in assumptions and variances. For further understanding of actuarial loss, please refer to this post.

Remeasurement should be a small number compared to the DBO. If there have been no significant assumption changes, remeasurement of less than 10% is reasonable.

Remeasurements higher than 10% don’t necessarily mean that the actuarial liability is wrong, but does require further investigation. It is important that auditors are convinced about the magnitude of remeasurements, given the assumption changes and events that happened over the reporting period. If not, auditors should get further split from the auditors, as shown in the table below: 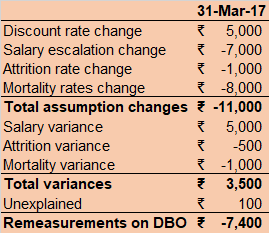 If remeasurement figure is large, it could either point to an error in actuarial valuation, or that some of the items have been wrongly classified as remeasurements (e.g. past service cost, or impact of corporate restructuring).

A reconciliation of employee data is crucial to ensure that no employees have been missed out from valuation. It also helps ensure that the data submitted for actuarial valuation is correct and consistent with the data last year.

From our experience, nearly 75% of data for all actuarial valuations contains errors, which are easily picked up when a data reconciliation table is prepared, like the one below:

Even though most auditors thoroughly challenge this assumption, often they use the wrong benchmarks to decide whether the discount rate has been set correctly.

First, understand what is specified in Ind AS 19. The discount rate must be based on yields on Government of India bonds (not any state government or corporate bonds). And understand that the discount rate varies by the duration of DBO. We have a separate post describing methodology. Another post sets out FAQs around discount rate.

Make sure that the duration of DBO is specified in the actuarial report. There are several definitions of duration. The one to be used in actuarial valuation should be the average duration (from date of valuation) over which the accrued benefits are expected to be paid, weighted by amount of cashflows.

Finally, and most importantly, make sure that the discount rate has been taken from a reliable source. Not all sources are complete or relevant for actuarial valuation. The yield curves produced by CCIL are widely considered very reliable for use in financial analyses in India. The data and methodology are also disclosed publicly.

We have compiled and published the interest rate data from CCIL here. There is also a tool to check the discount rate for AS 15 or Ind AS 19 valuation on the same page.

6. Be wary of sudden changes to salary escalation or employee attrition assumptions

Since the business outlook is unlikely to change on a regular basis, these assumptions are not expected to change year on year.

A sudden change, which is not consistent with management’s own views, could imply that an attempt is being made to ‘construct’ a liability figure to meet certain objectives, or simply that an error has occurred.

For example, let’s say that a company has been setting salary escalation rate of 7% for last several years. For the current year, a salary escalation rate of 3% has been used. However, the company continued to award pay increases as per previous practice and there is no change in business outlook – the revenue and profit projections are similar to those in the past. This could point to an attempt to depress the liability to enhance profits.

7. How accurate are the calculations done by the actuary?

In spite of using all the right methods and principles, sometimes it just comes down to the accuracy of actuarial models. If valuation is done using an annual projection model, inaccuracies are bound to exist in some or all metrics shown in an actuarial report.

Consider this example: most companies award salary increments in the month of April. When companies get the annual actuarial valuation done, the salary provided is as of 31 March of that year. Salary increments are imminent, starting next month, but still an annual model would assume that increments will be awarded ‘next year’. A monthly projection model on the other hand, will allow for the increment that is due from the next month.

An annual model also may not accurately allow for other features such as vesting schedule, leading to further inaccuracies.

Download our guide on transition to Ind AS from employee benefits perspective by clicking on the picture below.