Setting the right actuarial assumptions is central to the accuracy of any actuarial valuation. However, there is a general lack of understanding among the stakeholders about how the assumptions should be set.

No matter how much care is taken in doing an actuarial valuation, the results could still be useless if assumptions are not set correctly. For certain companies, choosing the wrong assumptions could mean that he liability in the books of accounts could be understated or overstated by as much as 50% or even more. From our own experience, accountants and auditors, irrespective of the size or reputation of their firms, have misconceptions about several key aspects.

This post is a part of a wider collection of issues around actuarial valuation of employee benefits. The main topic page can be found here.

This post doesn’t go into the specifics of how to set the actuarial assumptions, but only discusses the governance framework. Technical details about setting the discount rate can be found in this post and the article at the end of this post provides details about other assumptions.

Why the problem exists?

Why do companies fail to properly set the assumptions for their actuarial valuations? There are two main reasons:

Whose responsibility is to set actuarial assumptions?

All assumptions are the responsibility of the reporting company’s Board of Directors and is usually delgated to the Finance function. The actuary’s responsibility is limited to rendering ‘advise’, if asked for.

Given the nature of the assumptions, however, an actuary can only advise on the following two assumptions:

One point to note is that even though the actuary can set or advise on these assumptions, the reporting company remains ultimately responsible for their appropriateness. Therefore, the companies will need to ensure that they hire actuaries that have adequate knowledge and experience, and are also up to date with the constantly evolving regulatory environment.

What is the auditor’s role in assumption setting?

Auditors sometimes play a more direct role than they should be performing. Sometimes they assert their preference for their own choice of assumptions or methods. Often they even specify the actuaries they would like to work with. Therefore, many companies these days approach the problem with the sole objective of ‘satisfying’ their auditors. The role of the auditor should be limited to challenge and ask for justifications, rather than playing any direct role.

Companies need to find lasting solutions for this tussle where auditors and the views of their actuary disagree, rather than going for easy fix of doing what the auditors say. In an argument driven by facts and evidences, a concensus will be achieved. If the auditor or the actuary is neither agreeing to the other party’s point of view, nor producing evidences to counter that view, it is perhaps time for the company to re-consider their association with that auditor or actuary.

Download our guide to understand the basics of actuarial valuation, by clicking on the picture below: 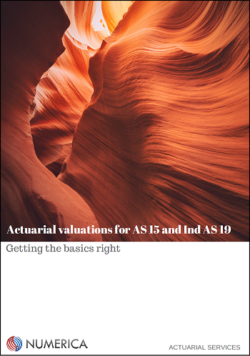